In this, the second article about Lovelock Cave, I will describe a few of the thousands of artifacts recovered from the site between 1912 and 1924. The remarkable things about Lovelock Cave were the state of preservation in this dry cave and the amazing variety of well preserved objects that were found there.

Llewellyn L. Loud first began recovering artifacts from the cave in 1912 after guano miners had finished removing tons of bat guano from the floor of the cave. Unfortunately, looters had already removed many items of archaeological value before Loud started his work. Despite the previous ransacking of the cave, Mr. Loud recovered many items of great archaeological and anthropological value.

Approximately 45 sets of human remains ranging from scattered bones to complete mummies and human skeletons were found. One Mummified child about 6 years old wrapped in fish netting was given to the Nevada Historical Society. Loud recovered the remains of a newborn child with the placenta still attached. I recall the days in the 1960s when some of these remains were on display at the Nevada Historical Society in Reno before the insensitive public display of them was discontinued.

Many examples of mammal remains were found in the cave. These included animals that had entered the cave seeking shelter, and others that had been brought into the cave as food by human occupants. examples of these remains include deer, bighorn sheep, wolf, coyote, badger, pronghorn antelope, jackrabbit and cottontail.

Human and animal excrement was found that gave an indication of what these mammals had eaten. Some coyote excrement contained human remains and human excrement revealed what the humans were eating in those days. It was an incredibly coarse diet of seeds, hulls, tough fibers and fish bones.

The cave provided protection from the elements to preserve such things as blankets of fir and feathers, strips of rabbit skin made into blankets, skins of meadow mouse and muskrat. Textiles included plant fiber aprons, sandals, and moccasins of tule and rush. Matting was made from grass, spike rush and cane. Many examples of wicker basket work were found.

In 1924, Mark Harrington resumed excavations in the cave started by Llewellyn Loud in 1911. Undoubtedly, many artifacts were stolen from the cave during the 13 years no professional archaeologists worked there. A few of these were brought to Harrington when he started his work at the cave. The excavations done by Mark Harrington were mostly in the deeper areas of the cave where some of the older artifacts were found. Eleven perfectly preserved duck decoys were discovered. 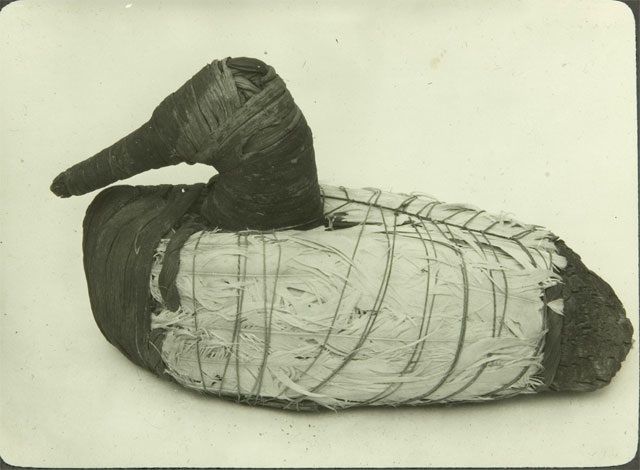 Harrington decided to do a stratigraphic section in the deepest part of the cave. The layers of the stratigraphic section were called the older period, the transition period and the later period. By studying the types of artifacts recovered from these layers, Loud and Harrington were able to determine that atlatls (throwing sticks capable of hurling a lance with great force) were used only during the older period. They found that during the transition period, both atlatls and bows and arrows were used. Finally, the later period, being the most recent, had only bow and arrow artifacts for weapons and hunting.

This is the first in a two-part series about Lovelock Cave, located on a terrace of ancient Lake Lahontan about 22 miles south of Lovelock in Churchill County, Nevada. The second in the series will describe some of the hundreds of artifacts recovered from the cave. It was excavated in 1912 by archaeologists Llewellyn L. Loud and again in 1924 by Mark R. Harrington. It yielded some of the richest archaeological Treasures ever found in the American West.

Scientists have determined the cave was inhabited by humans in several phases from about 3000 B.C. to about 1900 A.D. In more recent findings, the earliest habitation at the site may have been even older than originally determined by Loud and Harrington. In their classic book, “Lovelock Cave,” these two archaeologists collaborated to tell about the remarkable artifacts and human remains they discovered in the cave. I will describe many of these items in my next article in this series.

Family members and I first visited Lovelock Cave about 20 years ago. I also worked on several highway construction projects in the Lovelock area and hiked around parts of the mostly dry Humboldt Sink, which was once filled with marshes during the time the cave was inhabited. More recently, Phil Hanna and I returned to Lovelock Cave to see the improvements that have been made there to accommodate visitors to the site.

Unlike many other archaeological sites in Nevada, Lovelock Cave has been opened up to visitors who can freely take unescorted tours of the site and safely go inside on a well constructed platform to take photos and to see first-hand the interior of this remarkable site. There is a convenient parking area with a restroom and a path up the steep slope to the cave entrance.

In the early 1900s people exploring the cave found the uneven interior had a layer of bat guano several feet thick that had been deposited over thousands of years. When the ancient Humboldt sink west of the cave was full of water, swarms of bats lived there, eating insects from the marsh and depositing the guano in the cave where they nested. Before long, miners began to excavate the nitrogen rich guano and ship it by railroad to farms in California.

As the guano miners hauled the material away, they began to uncover items from the floor of the cave that had been left there by the former people who had lived there. Uninterested in the baskets, matting, furs, hides and other items, the miners piled much of it on the ground and left it there. Occasionally, bows, arrows, atlatls and other items were discovered. Sometimes, when human remains were found, people from lovelock would come out and take the skulls and some of the skeletons away.

Fortunately, when the amount of what the miners called “Indian Junk” interfered economically with their operation, they abandoned the venture. The guano miners left after removing two hundred fifty tons of guano from the cave. The Nevada Historical Society in Reno salvaged some of the archaeological material from the cave and contacted the University of California for assistance in conducting excavations. They sent L.L. Loud to conduct the unassisted recovery of over 10,000 well preserved specimens from the cave between April 1 and August 1, 1912. This material was divided between the Nevada Historical Society and the University of California.

In 1924, Mark Harrington was sent to the cave by the Museum of the American Indian, Heye Foundation to resume further excavations. In my last article in this series, I will describe a few of the thousands of artifacts that were recovered by Loud and Harrington. No one knows how much valuable archaeological material had been removed from the cave by weekend collectors between 1912 and 1924.

An ice fisherman taking a rest after an exhausting day on the ice.

It has been a Cassinelli family tradition for several years to go ice fishing when the lakes and reservoirs are safe for ice fishing. Ice must be a minimum of 6” thick to be safe. If there is corn snow above the solid ice, it may need to be even thicker. With the use of either a power auger or a hand auger, a 6” – 8” hole is drilled into the ice for each fisherman in the group. Those with a second rod stamp can use two holes.

Usually 4 to 6 or more of us pick a date in January or February and decide which lake or reservoir to try. Some of our favorites are Wild horse Reservoir north of Elko, South fork Reservoir south of Elko or Cave Lake southeast of Ely. We have also been known to go to Red Lake or Caples Lake along Highway 88 in California for day-trip fishing.

Layers of protective clothing must be worn, since the winter weather can be brutal. Waterproof boots with treaded soles, insulated gloves, earmuffs, long johns, and a warm jacket with a hood will help. It is always better to bring extra clothing than be “caught out in the cold.” Children dressed up in winter coats and mittens love to skate and run around out on the ice. Letting them pull out a fish is a treat they will never forget.

A family group will always have an ice sieve to clean snow and ice from the fishing holes when needed. The holes drilled are sometimes 24” or more deep. Some groups (including ours) may set up a portable ice fishing tent, a collapsable table with a propane stove, ice chests with no ice to keep worms and drinks from freezing and plenty of your favorite beverages. Simple wire or PVC rod holders to keep your pole at a 45 degree angle with the ice are nice to have. One year, I even made some wooden balanced and weighted trout decoys to lower down into an ice hole to attract fish to the place where we were fishing.

Every one fishing must have a license, trout stamp, extra rod stamp if wanted, short ice fishing poles, tackle box, worms, power bait, shrimp, jigs or whatever bait or lure you (and the fish) desire. Game wardens do check for licenses and go from group to group on snowmobiles. There should be a folding chair with a drink holder for each person. A trick we learned early on, was to attach a jungle bell or a rattlesnake tail to the end of the fishing rod so you can hear when you have a bite. You can then visit and tell lies to the other fishermen until the bell rings. An ice fishing sled or a large plastic box for your gear can easily be pulled across the ice to the desired place to fish.

A few times when the ice was solid and over 2 feet thick, we have taken the truck out on the ice. This must be done with extreme caution and is not recommended. The NDOW website usually has ice fishing conditions listed for each lake or reservoir. There is a humorous story about prehistoric ice fishing in my novel, Legends of Spirit Cave. Several ancient stone ice fishing picks were found at and near Lovelock Cave by the Humboldt sink, so we know that prehistoric people enjoyed the sport and the fish they caught.