My mother, Phyllis, was one of the first female blackjack dealers in Nevada. She and her sister, Clare, worked for Harold’s Club in Reno in the early 1940s. General Manager Raymond “Pappy” Smith was the first Nevada casino owner to hire female blackjack dealers to work in the clubs. His reasoning was if casinos hired female dealers, more GIs from the Reno Army Airbase would be attracted to the clubs.

In those days, casinos used composition chips as much as they do today. However, they also used the common medium of exchange in Nevada at that time, the silver dollar, for many of their table games. Winnings were paid out in silver dollars and tips and even wages were sometimes paid that way.

When I started school in Sparks, hot lunch for the week was 20 cents per day or $1 for the whole week. Every Monday, Mom, being a blackjack dealer, would give me one silver dollar for my weekly lunch. I soon noticed in addition to the Peace Dollars minted from 1921 through 1935, many were the much older Morgan dollars minted off and on from 1878 through 1904 and again in 1921.

Later in my illustrious career, I worked on our family farm on Glendale Road in Sparks, weeding onions and working in the potato fields. My uncle, Chester, was the bookkeeper and paymaster for the farm/ranch. At that time, wages for farm laborers was 50 cents per hour. At the end of each workday, boys I went to school with and I, along with other laborers, were paid for our work. Uncle Chester stood at the edge of the field with a cowboy hat full of silver dollars. As each worker passed by, he gave each one of us five silver dollars for the 10 hours of work.

Now, before you think we were getting ripped off back in those days, you should consider this amazing fact. If I was paid those same five silver dollars today, each one would be worth approximately $20. This means the wages for one day of work would now be $100. I could almost live on that.

In 1999, my crew and I uncovered the amazing stash of coin dies that had been buried in the ground at the old Carson City Mint building, now the Nevada State Museum. More than 500 of the rusty dies were recovered and many of them that have been cleaned are now on display at the museum. I honestly believe that were it not for my fascination for silver dollars, the buried coin dies wouldn’t have been noticed.

If you visit the Nevada State Museum, you can see the original Coin Press No. 1 that was used to mint many of the Carson City coins and also the amazing collection of one of each of nearly all the Carson City gold and silver coins ever made. On the cover of my book, Chronicles of the Comstock, are color photos of several of my Carson City silver dollars, including the unusual Trade Dollars that were coined at the Carson City Branch Mint. The book has many stories about the Comstock era and the historic old mint.

On a recent trip through areas of Northern Nevada rangeland that have been burned in fires during the past 3 years, I have made a few casual, unscientific observations. The purpose of my trip was hunting and camping in portions of Elko and Humboldt counties that had been heavily burned in recent range fires. I had hunted and camped in the same areas on different occasions in years before the fire damage had occurred and was saddened to see the destruction of the natural landscape that has occurred in recent years.

The most obvious damage occurred to the vegetation in the region where thousands of acres of rangeland and wildlife habitat have been lost. The Bureau of Land Management and other government agencies such as Department of Wildlife and U.S. Forest Service have been cooperating to revegetate as much of the area as possible. The methods being used are both aerial seeding with native grasses from aircraft and on-ground seeding in the flatter areas with mechanical grain drills. Seeding efforts are never a perfect solution for such disasters, but it is better than no action at all. Seeding in the high desert country depends on precipitation to be successful and water is a scarce commodity in the desert. If the rains come too fast before plants take root, heavy erosion occurs.

The impact to wildlife is the next major concern, since the native species that do survive the fires must relocate to places that were not damaged that are suitable for their survival. We cannot estimate how many birds and mammals simply do not survive this relocation. Most deer, pronghorn antelope, sage grouse, quail, partridge, coyotes, bobcats and other animals were obviously impacted by the fires. Until habitat for these creatures grows back, the range cannot support them. I estimate ten to twenty years before the range recovers even with revegetation efforts.

The extent of the destruction must be seen to be believed. When we observed the revegetation efforts in the older burned areas, I noticed the main seed used was the grass seed mix, probably crested wheat grass that has filled in quite well. The areas where the grasses had filled back in had numerous pronghorn antelope and coyotes, but no deer. Antelope feed quite well on the grasses and other small plants in the seed mixes. Deer, however, are herbivores that require vegetation that requires a longer period of time to mature in order to sustain a herd. These animals eat sagebrush, buck brush, bitter brush and others that require several years to mature to the point they will sustain many deer.

Sage grouse are the most affected by the fires. Sage hen habitat throughout the Great Basin has disappeared drastically from fire damage and human development in recent years. These creatures eat primarily sagebrush (artemisia) and little else. I have noticed that the sagebrush that has begun to grow in the reseeded areas does not look the same as the native sage brush. I have a fear that if it is not exactly the same as the native species, the birds will not eat it. The other problem I see with the sage brush coming up in the reseeded areas is that the individual plants are widely scattered. In original sage brush habitat, the plants are usually all sagebrush, not a mixture. 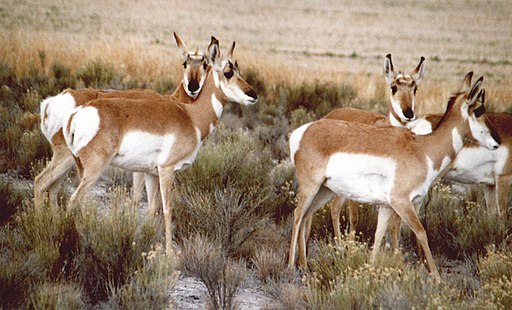 On a recent hunting/camping trip to Humboldt and Elko counties, my son, John, and I had a remarkable closeup experience with a group of the elusive pronghorn antelope abundant in the area. It is rare to approach very close to these beautiful animals, so this was a special treat to see them and their activities up close.

After camping for two days on the shore of Willow Creek reservoir in Elko County, we decided to return home, since the deer habitat in the area was in such poor condition due to recent fires which had devastated the area. We were traveling south between Midas and Golconda through a portion of the range that had been turned to scorched earth along the east side of the highway. On the west side there was the yellow grass from BLM revegetation operations.

During our trip through the mountains and desert country, we had seen many groups of from one to thirty or more pronghorn antelope running in the distance. It seems they always see us long before we see them, since their eyesight is so remarkable.

Suddenly, a small group of three antelope does dashed across the highway directly in front of us. They immediately stopped and looked back across the road where they had left two fawns behind. We stopped the truck with the camper to get a look at the animals. We noticed that the two fawns were still behind the barbed wire fence alongside the highway. Pronghorn antelope do not jump over fences like deer do, but rather, they prefer to crawl under the bottom wire of the fence.

Crawling under the wire of a fence was obviously not a skill the fawns had yet learned, since they just paced nervously back and forth waiting for the does to come back to rescue them. Amazingly, the does ignored us, parked just a few feet away and dashed back across the highway to rescue the fawns. After a few minutes of encouragement from the mature does, the fawns figured out they had to crawl under the wire and join the does.

The tiny heard then galloped back across the highway and took off through the tall grass.

The need to rescue the fawns overpowered any fear the does may have had of us parked in the highway just a few feet away. Their maternal instinct saved the tiny baby antelope from abandonment. We can be sure the fawns will know what to do the next time they need to cross a fence. The BLM requires that all fences in antelope habitat have a bottom wire high enough for the antelope to scurry under.