My Great Grandfather, Pietro Cassinelli, an Italian emigrant, arrived in Dayton, Nevada in the late 1880s after working his way across America as a cowboy. Within a few years, he and his cousin, Bert, acquired a ranch along the Carson River. There, he and his wife Theresa raised a family of 12 children, one of whom was my Grandfather, Pete.

When I was a boy working on Pete’s ranch in Sparks years later, he told me about a petrified forest with many logs of petrified wood he had seen near the ranch in Dayton where he had grown up and went to school in the early 1900s.

My invaluable research assistant and brother-in-law, Phil Hanna, who recently moved to Dayton with my lovely sister, Rae, recently turned me on to something that Mark Twain wrote in Chapter 26 of his classic book, Roughing It. It seems that when describing some of the mineral resources of the Silver State, Twain remarked “Lately evidences of bituminous coal have been detected. My theory has ever been that coal is a ligneous formation” (Ligneous meaning resembling wood).

Twain was skeptical about the idea of coal existing in Nevada until he spoke to a Captain Burch on the subject and was told that in the region of Dayton, Burch had seen petrified trees the length of two hundred feet. This established the fact that huge forests once existed in this remote area. This firmed up in Twain’s mind that coal may also actually exist in Nevada.

Now, let’s jump forward to modern times. My family and I enjoy hiking, rock hunting and exploring the many hiking trails around the region. Occasionally, we find a few pieces of petrified wood but nothing like the two hundred foot trees described in Mark Twain’s Roughing It.

We did find some long trenches obviously dug over 100 years ago that were surrounded by a few small pieces of petrified wood. This is an indication that the petrified forest described to me by my grandfather and written about by Mark Twain did actually exist. All the huge logs obviously have been taken away and we have no idea who took them or where they ever ended up.

Amazingly, some of the pieces we have found are black and have the appearance of coal, except they have the wood grain typical of petrified wood. Our theory has always been that the black petrified wood was caused by the trees being in some ancient forest fires or perhaps knocked down during a volcanic eruption millions of years ago and being covered with hot volcanic ash. This would have turned the wood black like charcoal and buried it until it became petrified.

This year, Dayton Valley Days will be celebrated in downtown Dayton on September 19th and 20th. I have signed up to have a booth at the celebration where I will have samples of the beautiful petrified wood and even the amazing black coal – like wood described by Mark Twain. We will have these items offered for sale in addition to a selection of rock art collectible petroglyph replicas that make interesting yard art that will last for centuries. 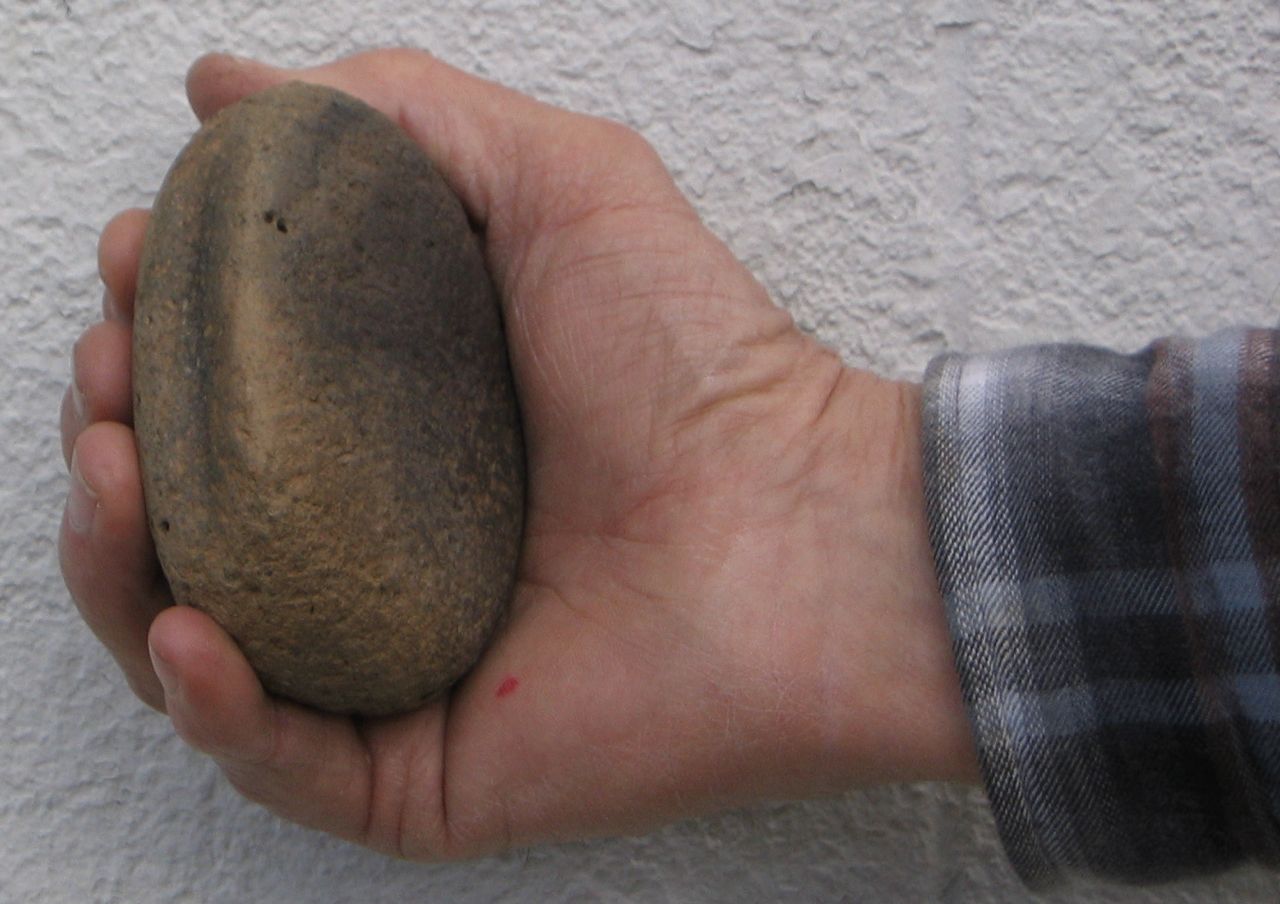 Many, many years ago, I was looking at home lots being cleared in a new residential area along the Carson River southeast of Carson City. As I walked through the sagebrush across a rather steep slope, I noticed a smooth, fist-sized cobble on the ground that seemed to be out of place for the area when compared to the rough, broken natural stones that littered the hillside. Being somewhat of a rockhound and an amateur archaeologist, I picked up the stone and examined it more closely. I immediately recognized that the rock had been worked by the hands of man, and at first I thought it was a mano.

For those of you who may not know, a mano is a flat, smooth stone used by the American Indians with a larger flat or slightly concave stone for the purpose of grinding or hulling nuts, seeds or grain.

Upon closer examination, however, I determined that the stone was not the common mano, which really is quite abundant in the fields and places where prehistoric Indians were known to have lived. This stone differed from a mano in several distinct ways. These differences enabled me to identify the item as an arrow-shaft straightener rather than a common mano.

Carved or worn into the edge of the stone was a distinct groove that was highly polished. The groove was about 1/4” wide and 3” long. The stone was flat, and both sides were blackened from having been heated in a fire. During the process of making arrows, the wooden shaft must be perfectly straight in order for the arrow to fly straight and true for the desired accuracy. This was accomplished by using a heated stone to rub along the arrow shaft to work out the natural irregularities in the wood. The user held the hot stone with a piece of leather and rubbed it back and forth on the convex side until the arrow became straight. The hot stone also helped to smooth and polish the arrow shaft.

I since have seen other specimens of shaft straighteners from different areas around Carson City, Virginia City and Como almost identical to the specimen I found. The straightener obviously had been a tool that was widely used by the local Indians. This is just one example of the rescue of an unusual artifact from a construction site before it was buried by heavy equipment or hauled away during construction. I donated this specimen to the Carson Valley Museum and Cultural Center in Gardnerville, Nevada, where it remains on display with hundreds of other Indian artifacts in the Cassinelli-Perino Artifact Collection.

I have written a book about this and the other artifacts in the collection. The title is Preserving Traces of the Great Basin Indians. It is available at the Mark Twain Bookstore and the Gold Hill Hotel bookstore. There is a delightfully humorous story in the last chapter that tells how the local Indians made their arrows, including how the arrow straighteners were used. The book contains hundreds of illustrations and descriptions of arrowheads, tools and other artifacts found in western Nevada. Every spring, I do a lecture about prehistoric Nevada at the Gold Hill Hotel, where I display and discuss this and many other Great Basin Indian artifacts. I hope to see you there.