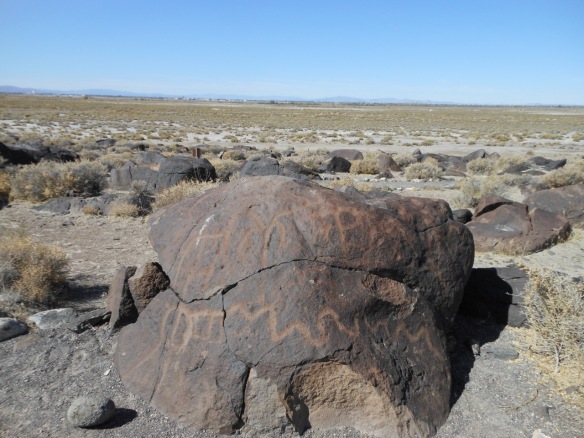 Throughout Nevada and other places in the American West, examples of  American Indian rock art, otherwise known as petroglyphs or pictographs, can be found.

Petroglyphs are images that are carved, pecked or scratched into the surface of a suitable stone. This can be as simple as grooves etched or scraped into the rock to create a desired image, or it can be done on rock surfaces covered with a brown or black coating known as “desert varnish.” This method reveals a lighter color of rock beneath the thin coating of the rust-colored desert varnish.

Important: Please do not touch petroglyphs or pictographs, as this can cause irreversible damage. Also, be sure to stay on designated trails.

Desert varnish is a complex chemical reaction that occurs over a long period of time when moisture, dust, manganese, iron and other elements stain the surface of stones, boulders and rock cliffs in a desert climate. Most of the petroglyphs found in Nevada have been drawn on surfaces having desert varnish. Modern people have attempted to decipher or speculate on the meaning of these

images. Despite these efforts, the true meaning of most of these remains a mystery.

Another type of rock art is called pictographs. These are created when the artist uses stains of natural materials to paint an image on stone. These are usually found only in caves or sheltered locations where the dye or paint cannot be easily washed away.

There are several types of petroglyphs and pictographs. Those with geometric patterns of wavy lines and circles are called the curvilinear style. Rock art with straight and parallel lines in geometric patterns are called rectilinear style. Both of these can be found at the Grimes Point petroglyph site east of Fallon, Nevada. Rock art representing animals can be found at many sites in and around the Great Basin. These can show bighorn sheep, deer, lizards and other animals. They are called zoomorphic images. Any rock art showing images of human figures, shamans or imaginary human-like creatures are called anthropomorphic images.

The question always arises of how old the rock art images might be. This has been one of the most difficult questions to answer with any accuracy. We do know that images showing the use of the atlatl or throwing stick are likely over 1,500 years old. Representations showing figures using the bow and arrow are more recent and are likely less than 1,500 years old. Occasionally, pictographs with organic binders in the pigments can be dated with the radiocarbon method. Relative age can sometimes be determined by the amount of desert varnish that has covered over the images since they were originally made. Recently, petroglyphs in the Winnemucca Lake area were determined to be about 14,000 years old.

For people on the Comstock, the closest rock art site for them to see is also one of the largest in the state of Nevada. Just a few miles north of Virginia City along the Lousetown Road is the Lagomarsino Canyon Petroglyph Site. This can also be reached
from Reno and Sparks from I-80 east at Lockwood and traveling south on Canyon Way.

Another popular site nearby is the Grimes Point Petroglyph site a few miles east of Fallon, Nevada just off US-50. There are petroglyphs in the Peavine Mountain area, Pyramid Lake, Winnemucca Lake and several other scattered locations around western Nevada. It is best to get a map of the area you wish to visit and follow a few basic rules of rock art preservation. I have seen many petroglyphs while on hunting trips around Nevada over a period of many years. One of the sad things about the petroglyph sites available for us to see is the damage that has been done to this valuable prehistoric resource by thieves and vandalism. Please do not even touch the petroglyph images when you visit these sites. People have damaged many of the carvings with spray paint, firearms, chalk, oily hand prints, graffiti and even careless footprints.

The Nevada Rock Art Foundation has taken up the task of helping to preserve the many rock art sites in Nevada. They have stewards who visit the sites on a regular basis and report vandalism and damage to the authorities when it occurs. Several people have been prosecuted for stealing or damaging petroglyphs found on public lands. Feel free to take all the pictures you want, and please stay on the designated trails when visiting a site. It can be an enjoyable experience seeing the amazing art created by the people who inhabited the area hundreds and thousands of years ago.

For those of you who would like to own a sample of rock art legally, I will tell you how this can be done in an upcoming post. (Hint: They’re very modern, and are made by a person with the initials D.C.)

Stay tuned for a surprise!