I’ve written several articles for the Comstock Chronicle about the deplorable conditions that plagued the Northern Nevada Adult Mental Health Services Cemetery for many years. These are contained in the last chapter of my latest book, Chronicles of the Comstock. Formerly known as The Nevada State Asylum, the State Mental Hospital had its own cemetery during the period from 1882 to 1949. When first used, the cemetery was neat and orderly. Trees and shrubs were planted and the graves were placed in numbered rows as in any well-kept cemetery.

Many of the patients of the hospital who died and were interred in this cemetery were former residents of the Comstock. Had these people not become mentally ill, they would have been buried in Virginia City, Gold Hill or Dayton. There were many causes of mental illness for the early Comstock people, including alcoholism and working conditions in the mines and mills where high temperatures, bad air and mercury poisoning were common ailments. As it were, the patients often passed away after many years of confinement in the institution and had in many cases been forgotten by their families.

As time passed, the cemetery, located along 21st Street in Sparks at the end of Hymer Avenue, became neglected and unmaintained. Patients, or “inmates,” of the hospital were employed to bury those who died. Markers placed in the early years disappeared and when new graves were dug, previous burials were sometimes uncovered. As a small child, I lived nearby on Hymer Avenue and witnessed the excavation of a deep ditch across the cemetery for an irrigation pipe and saw many of the graves torn apart as the equipment dug through the cemetery.

Finally, in 1946, the state decided to start burying the deceased people in a different section of ground about 200 yards to the west of the original cemetery. This small cemetery was used from 1946 through 1949. It was in 1949 that the State of Nevada decided to discontinue burying their deceased patients on the hospital grounds.

Now, let’s jump ahead 61 years to more recent times. During the 2009 legislative session, a bill was introduced and passed to provide funding to protect and preserve the long neglected historic cemetery. Plans for improvement included reclaiming a children’s park on the north end that had been built by the City of Sparks. This actually sat on part of the old cemetery. An enclosing fence and granite obelisk marker were designed to memorialize the 800 people known to have been buried there. 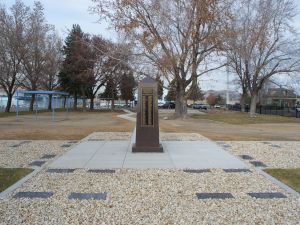 This obelisk memorial now stands in remembrance of past patients of the Nevada State Asylum who were buried disrespectfully.

The State Public Works Board contacted me to see if Cassinelli Construction Co. would be interested in removing the graves from the small cemetery and relocating them to the historic cemetery near 21st Street. The state has plans for constructing another building where the 1946 – 1949 graves were located. John Cassinelli, owner of the company, submitted a bid and was awarded the contract to exhume up to 30 graves from the small cemetery and reinter them in the memorial park area being constructed adjacent to the historic cemetery.

I was appointed superintendent for the project. My crew and I proceeded to exhume the graves. A ground-penetrating radar technician had marked about 30 possible grave locations along a fence line at the small cemetery adjacent to the Townsend Building at the hospital. About 13 of those marked corresponded with copper plate grave markers set in concrete blocks that had names and dates on them. We used the same backhoe we had used when we uncovered over 900 coin dies at the Carson City Mint in 1999.

As we excavated each grave, we used the backhoe until we reached the first sign of wooden casket material. We then carefully hand dug and screened the material from the excavation much like an archaeological dig. All the caskets had long ago collapsed and the wood was nothing more than rotted fragments with a few rusted nails. The human remains were fairly intact with most of the major bones being salvaged and carefully screened from the sandy soil. Each day we worked, Walton’s Funeral Home came out and transported the remains back to their facility in Sparks. They placed the remains and any other grave goods in new caskets.

Archaeologist Kim Hopkinson examined each set of remains in an effort to confirm identity, sex and ethnicity. The remains were so fragmented, this effort was not very productive. It appeared the copper markers that had been placed on the graves were not accurately placed. Some markers had no grave by them and some others did not match the remains that were found at that location. We also found the ground penetrating radar technique of locating graves was very unreliable for this particular project. The technician was called back to run a new set of GPR readings and over 30 of these possible locations proved to have no remains associated with them.

In all, 19 graves were removed from the small cemetery and brought over to the new location at the area where the memorial marker will be placed. In addition, four other sets of remains accidentally dug up during a construction project on 21st Street were brought over for burial. Each casket was placed in a vault and reinterred in the new section. One set of remains of an American Indian woman was returned to the local Indian tribe for burial at their tribal cemetery in Yerington.

1 thought on “Relocating a Nevada cemetery”