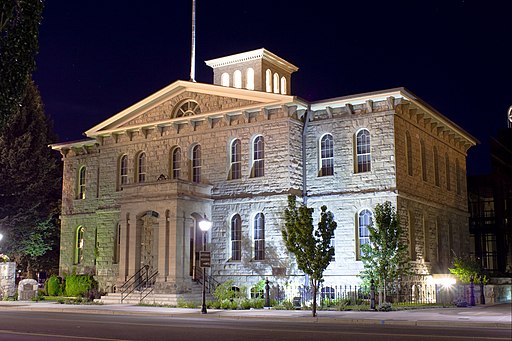 Having completed several tours as a docent guiding tours for the Nevada State Museum in Carson City, I want to tell you about the unique mine exhibit at the facility. Many years ago, before I knew better, I took some self-guided tours of several of the many open tunnels and shafts around Virginia City and Gold Hill. With my kerosene lantern and a flashlight, I entered places and did things that I now know I am lucky to have survived. This was an extremely dangerous pastime and no one should venture into these old mines.

A much safer way to see and learn about the old mining methods used during the Comstock mining boom is to visit the Nevada State Museum and see the many exhibits about the Comstock. This region dominated the early history of Nevada. Many people have a natural curiosity about the mines and how things were done down there. The favorite tour for many of the school groups and adults alike is the mine that has been built deep in the basement of the museum which once was a branch of the United States Mint.

Originally opened on Nevada Day in 1950, the mine has become one of the museum’s most popular attractions. With a gift of $50,000 from the Fleischmann Foundation and many gifts of materials from people and industry, a very authentic-looking mine was created in the cavernous basement of the old mint building. It represents many of the underground mines in Nevada. The walls and ceiling are plastered with actual minerals and ore donated by several Nevada mining companies and from the Comstock.

The tunnels are timbered and braced just like those in actual mines and the floors have mine car tracks and plumbing for compressed air and water. You will cross over an elevator cage and floor from an old shaft on the Comstock. You will see a powder magazine and costumed figures preparing dynamite and fuses. There are men operating drills, loading ore carts and performing other tasks in the tunnels.

While the area for the displays was not large enough to show life-sized square-set timbers, there are miniature displays showing how this innovation was used. The square-set timbers were used in a series of 6’ cubes to support the walls and ceilings of large underground ore bodies that were encountered on the Comstock.

There is a miniature stamp mill that can be operated by pushing a button to show visitors how the cams lifted the heavy stamps and let them fall to crush the ore. Even this miniature mill makes a startling sound when it is operated. Stamp mills were incredibly noisy and the incessant clatter of hundreds of stamps running day and night had to have been an annoying experience.

Having actually been down in some of the original Comstock mines and tunnels, including Sutro Tunnel, I can tell you that there is much more to see and learn about at the Nevada State Museum mine exhibit. Fortunately, most of the dangerous tunnels and shafts have been sealed off to keep people from becoming injured or killed when entering these places. I cannot think of a worse way to die than falling down a 2,500’ mine shaft, bouncing off timbers and protruding rocks on the way down. Just entering a tunnel is equally dangerous. Rocks can cave in on top of you and often rotting planks cover unseen shafts.

A weekly column does not offer enough space for me to describe all the features of the Nevada State Museum Mine exhibit. This is something everyone interested in Comstock history should experience in person. Be sure to visit the upstairs history exhibits while you are there. There are artifacts and displays of life and mining on the Comstock as well as other Nevada mining districts including Tonopah, Goldfield and Aurora. This is a great learning experience for the entire family.